The province you select allows us to calculate an estimated MSRP for your vehicle.

The province you select allows us to calculate an estimated price for your vehicle which includes Freight & PDI of , Air Conditioning Charge of if applicable and Dealership Fees of .

What is it that sets Lexus apart? We believe that it is our values. They guide everything we do, every interaction with our Guests, and every vehicle that we produce. We are absolutely committed to never compromising on what we believe in. We invite you to believe, too.

When you see an RX 350 on the road – from Seattle to Saskatoon, from Miami to Montreal, you can take pride in the fact that it was likely made in Canada. Toyota Motor Manufacturing Canada’s (TMMC) South Plant was specifically constructed for RX production, making it the first plant outside of Japan to ever manufacture a Lexus. The first RX 330 came off the line in 2003. Today, Lexus RX 350 is Canada’s best selling luxury SUV.

TMMC made history again in 2014 when the plant began manufacture of the RX 450h featuring Lexus’ renowned Lexus Hybrid Drive — adding the distinction of being the only plant to manufacture a Lexus hybrid outside of Japan. South Plant’s team of dedicated Lexus craftsmen expertly assemble approximately 104,000 RX SUV’s each year.

TMMC's Lexus Plant has received 12 J.D. Power Plant Quality Awards, more than any other North American Manufacturer. This includes Gold in 2012 and Platinum in 2011 and 2014 — the only Platinum Awards ever won by a Toyota/Lexus plant outside of Japan.

This is truly a story of Canadians creating amazing.

This is truly a story of Canadians creating amazing. 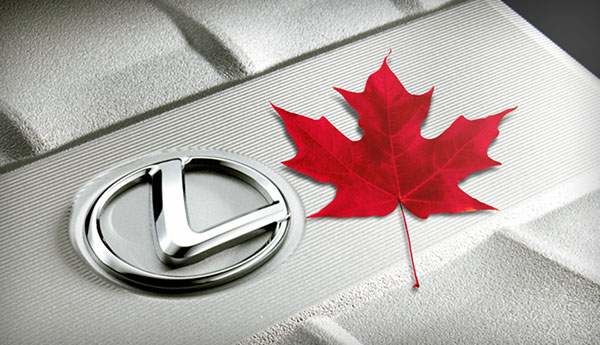 Register for email updates on Lexus news, lifestyle and design events, and the latest in vehicle concepts and performance

Your nearest Lexus Dealer is just a click away